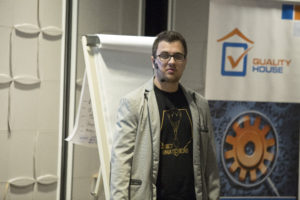 „I am part of that power which eternally wills evil and eternally works good”
Software Development Engineer in Test with about six years of experience. Most of his career spent working for companies from the different part of the world. His curiosity led him to move to Ireland in 2016 where he worked first for Dell and now works for Rakuten Kobo.
He became tester because outside becoming demolition expert it was only available option to get paid for breaking stuff. Even though he specialises in Test Automation, his first love was Manual Testing. He loves experimenting seeing new things and how they affect his world.
In free time writing his blog thebrokentest.com. Where he aims to discuss different code smells in test automation. He also likes to share their various testing inspirations.

IT is the child of Science – both mathematics and physics there was a long line of scientists and enlighten men that took us to this point.
But Have you realised that YOU are part of that line? Testers are the scientist too. All theories have to go through thousands of experiments before they are proven right. Those tests are bread and butter of scientists. They may prefer to call them experiments, but there are not so different from our own.
And they are doing it for hundreds of years. Let take a look at their toolset and see what we can steal from them.